The Most Haunted Houses In The World 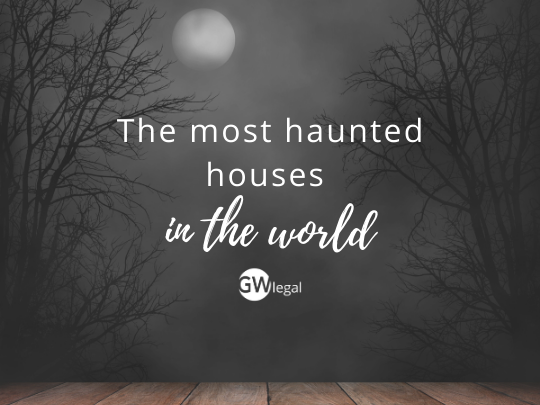 Heat up the pumpkin soup, light a candle and snuggle up, here is some spooky Halloween reading for those who are as property-obsessed as we are!

Property is our bread and butter here at GWlegal. We have been helping clients with the legal aspects of buying and selling property, as well as remortgage and equity release, for around 35 years now.

As such, we thought it would be appropriate to sum up some of our favourite scary houses across the UK and further afield, ahead of All Hallow’s Eve on October 31. Spooky day trip, anybody?!

Here are some of the supposedly most haunted houses in the world. Would you dare
enter them?

The World’s Most Haunted Houses:

Apparently this IS the most haunted house in England, so we’d recommend that you only Google this Essex Victorian mansion (which was destroyed by fire in 1939) if you aren’t faint-hearted! The first signs of paranormal activity at the Rectory occurred in the 1860s when footsteps were heard in the dead of the night. Other ghost sightings have included the ghost of a nun, two headless horsemen and a phantom carriage, as well as the phantom ringing of the servant’s bells and bottle-throwing. Even the Daily Mail has sent a paranormal investigator to the old mansion - it’s that well known for ghostly incidents. Spooky!

Also referred to as the currently most haunted house in the UK (there are a lot of them, apparently!), this supposedly haunted house is said to have been the location of sacrifice, suicide, black magic rituals and was also used as a hideout by criminals. Two demons, a witch, orbs and other ghostly presences all live at the house, according to owner John Humphries. Sounds like a lovely place to spend the night!

This house has hosted a number of paranormal incidents including tapping sounds from the cellar, a pair of duellists fighting, and the ghost of the Grey Lady, which has been seen on various occasions. The padding sound of a phantom cat’s feet has also been heard on the bare floorboards around the house. Scary stuff!

Turns out Gloucestershire is a paradise for paranormal-lovers, with yet another old property from the area making the list of top haunted houses in the UK! This mansion seems normal from the outside, but inside, several rooms and whole floors are missing. Some visitors to the mansion claim to have been attacked by ghosts and others have collapsed, while women who have been to the bathroom reported seeing a floating head. Other supernatural beings such as the ghost of an old woman and a little girl have also been spotted.

The Land Down Under is filled to the brim with beaches, kangaroos and tanned surfers, right? Well, apparently Oz has its fair share of ghosts and ghouls too! This late Victorian mansion, built by a wealthy landowner in 1876, is reputedly Australia’s most haunted house. Some of its ghosts supposedly include: a young child who was dropped down the stairs, a maid who fell from the balcony and a stable boy who burned to death. The most active, however, is the ghost of the son of the caretaker who was found curled up next to the dead body of his mother. Creepy.

Some of the ghosts spotted at this castle-turned-hotel boasting seven floors, 204 rooms, numerous portrait galleries, and a private opera house which seats 200 people, include: La Dame Verte (Green Lady), who was apparently the illegitimate child of King Charles VII and was later murdered by her husband in the château in the 15th Century after he caught her having an affair. She is often seen in the tower room of the chapel, wearing her green dress, with gaping holes where her eyes and nose should be. When not startling guests by her appearance she can be heard moaning around the castle. Lovely!

As soon as you hear the phrase ‘ancient Indian burial ground’ you know there’s some Stephen King-esque haunting going on! According to legend, this old plantation was home to 10 murders. That’s not to mention the ghosts of former slaves that have been sighted, as well as others who previously lived in the house, including the ghost of children. To top it all off, the ghost of writer William Winter, who was reportedly shot on the house’s front porch, has been spotted writhing in agony, crawling up the stairs, before disappearing into the air of the 17th step. Scary!

Is my house haunted?

According to paranormal ‘experts’ Barri Ghai, Sandy Lakdar and Chris Fleming of TV show Help! My House is Haunted, some telltale signs that your property is haunted included:

1) Feeling of being watched when alone

3) Household objects mysteriously disappearing and then reappearing in different places

4) Hearing unexplained whispers, footsteps, thuds or someone calling your name

5) Seeing shadows or movements out the corner of your eye

6) Frequent electrical problems such as lights inexplicably turning on or off, or appliances not working or acting up

7) Feeling of being touched by unseen hands

8) Unusual smells such as unexplained perfume scents, flowers, cigars, cigarettes, food or even the stench of death and decay

9) Waking up unexpectedly between 3am and 4am and sensing dread, fear or feeling like you're being watched

More information can be found here.

Help, I think my house is haunted! What should I do?

Most articles available online on the subject will tell you to keep what is essentially a ‘ghost log’ detailing everything you can think of regarding any potentially paranormal incidents (times, what happened, location in the house, how you felt, etc.) so that you can present these details to a ‘professional ghost hunter’ who may be able to detect and hopefully dispel the spirits from your home.

There are lots of other (perhaps not so scientific) methods listed on the internet. Wikihow, for example, suggests getting a dog such as a German Shepherd, as larger dogs tend to sense spirits (apparently) and act as a sort of paranormal guide dog. We’re not so sure what you should do after this, however!

Alternatively, you could always consider selling your property and buying a new one!

I’m buying a house! What should I do next?

Whether it’s haunted or not, the team at GWlegal is well equipped to deal with conveyancing processes of all kinds. We do after all have almost 35 years’ experience in the property field!