Will A Bigger Home Make Me Happier? 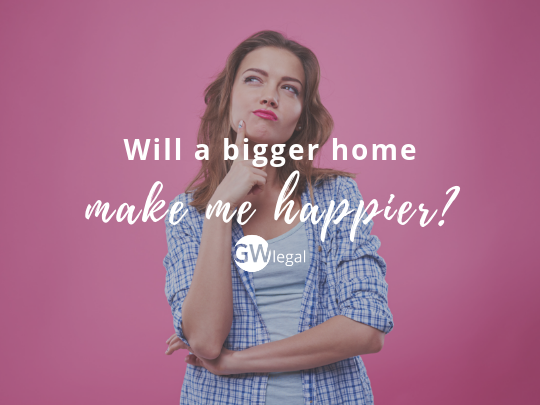 An interesting survey out of the US has revealed that people aren’t any happier when they own and live in bigger houses, compared to those with smaller or medium-sized properties.

The survey noted that American homes are much bigger than they once were. In 1973, when the country’s Census Bureau started tracking home sizes, the median size of a newly built house was just over 1,500 square feet. Since then, the average size of a new house in the US has expanded rapidly. In 2015, the figure reached nearly 2,500 square feet.

There are also fewer people, on average, living in a home. Studies suggest that the average person now has 971 square feet to themselves, almost double the amount enjoyed by individuals in the early ‘70s (507 square feet per resident).

Despite all that space, people aren’t any happier with their living situation than they were in 1973.

In the paper by Clément Bellet, a postdoctoral fellow at the European business school INSEAD, it is stated: “Despite a major upscaling of single-family houses since 1980, house satisfaction has remained steady in American suburbs.”

Perhaps most interestingly, a key reason modern-day residents aren’t content with their homes, according to the researcher, is… envy.

Bellet believes that people aren’t happy with their homes because they compare them with others in their neighbourhood—particularly the biggest ones.

Generally, and initially, people are happy with their homes. That is until a bigger one pops up on the block. Jealousy of others leads to dissatisfaction down the line.

Another reason that has been given for unhappiness while living in a bigger property is loneliness. John Stilgoe, a professor of landscape history at Harvard University, states: "The big house represents the atomizing of the American family. Each person not only has his or her own television -- each person has his or her own bathroom. Some of these houses are literally designed with three playrooms for two children. This way, the family members rarely have to interact.”

As it turns out, less is indeed more when it comes to housing!

So how can we combat this property-related problem here in the UK?

Well, most of us will never have this same issue of space here in England, where we simply don’t have that much of it.

The average UK home including older and new-build properties is just 85 to 90 square feet in size.

Would English people be happier with more space - or would we end up like the Americans?

Research by Dr Chris Foye at the University of Glasgow, just like the US findings, suggested that when people move to a bigger house, it may not take long for them to start to feel like they don't have enough.

Surveying almost 1,000 people who chose to upsize their home, Dr Foye’s research found that housing satisfaction initially increased after a move by 1.2 points on a seven-point scale. But within three years, this rise had diminished by about 30% as people's space expectations increased.

In addition, buying bigger houses usually exist alongside more mortgage debt, working longer hours and/or commuting a longer distance, which can result in unhappiness. That’s not to mention the environmental costs.

How can we be happier with the housing we have?

There are a number of ways people can make better choices when it comes to buying property. A few tips from the GWlegal team include…

You need to be able to afford the home you are committing to and that’s not just in relation to mortgage repayments but also upkeep of the property, in terms of both money, time and energy (think: gardening, cleaning, renovations and repairs, bills & monthly costs, furniture and decoration, and so forth). If you don’t have the time or money (or even just the energy!) to maintain a large home in between work, family and other commitments, it’s certainly not going to make you any happier than a smaller flat would.

Consider what your family really needs

Do you really need a massive backyard if there’s a giant park down the road? What about that home gym? You may really miss the social element of taking your weekly Pilates class as, let’s face it, running on a treadmill alone at home isn’t going to remain a novelty forever. Before you start your home purchasing journey, make a list of the things that are really important to you in a property - what you absolutely need and things you’d like but are not essential. This will help guide you.

Think about the other implications

Will buying a bigger house mean being further away from your work, local amenities, good schools, medical service and so forth? Will it put you in debt or force you to work longer hours and spend less time actually enjoying your home and the family? If so, it’s probably not worth it!

Remember that home is where the heart is

A home of your own is a space to make memories in. It’s where you and your family will conduct your daily life - and probably where many of the big milestones will happen. It’s important to have enough space to live well and comfortably, but beyond that, size really isn’t what you should be striving for.

The conveyancing journey can be a tricky one. You’re going to need the right professionals on your side. Expert estate agents, skilled financial planners and experienced property lawyers can all help you make this testing time much easier, so you’re in your new home sooner than ever.