What Is The Summer Solstice And What Should I Do For It? 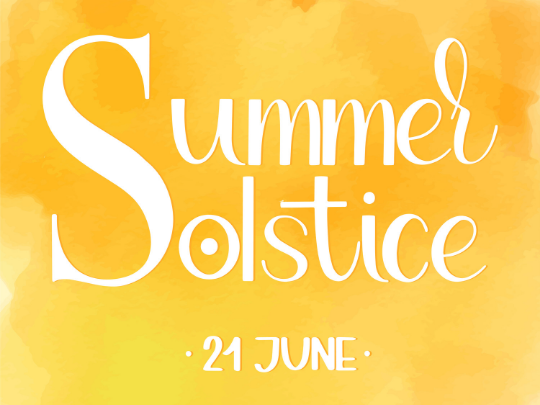 The summer solstice - AKA the lightest, longest day of the year - is about to happen

In the Northern hemisphere, the solstice this year falls on Friday, June 21. In total, there will be 16 hours and 38 minutes of sunlight enjoyed by sun-worshipers in the UK. The sun will rise at 4.43am and set at 9.21pm.

So what is the summer solstice exactly?

The summer solstice is also known as midsummer, a term you’ll probably hear used a lot in northern Europe where it’s especially celebrated given the more temperate climate means the solstice marks the unofficial ‘middle of summer’. In other warmer climates (or where summer is longer), the solstice generally marks the beginning of the season. In the UK, most people regard the summer solstice as the first day of summer. It’s also an important occurrence for both astrologists (the solstice officially marks the beginning of astronomical summer) and meteorologists.

The summer solstice happens when the Earth’s poles tilt towards the sun at their maximum rate, meaning the sun reaches its highest possible position in the sky, and is directly above the Tropic of Cancer. As a result, the day of the solstice will have more daylight (earlier sunrise and later sunset) than any other day of the year.

The summer solstice happens twice a year - once in the Northern hemisphere (that’s us!) and another time in the Southern hemisphere (e.g. Asia, Australia). For those interested in the science of it all, here are a few fun facts. On the summer solstice, Earth’s maximum axial tilt towards the sun is 23.44 degrees. The sun’s declination from the celestial equator is 23.44 degrees.

Here in the Northern hemisphere, the summer solstice generally occurs between June 20 and 22. The orbit of the Earth is the reason why the date varies slightly year-to-year. The Earth orbits the sun in an eclipse and its orbital speed varies slightly during the year.

There is also a winter solstice on the same date in December in the Northern hemisphere, which sees the least sunlight hours of the year.

How is the summer solstice celebrated around the world?

Ever noticed that weddings are most commonly held in June? One reason for this is that the summer solstice period traditionally fell between the planting and harvesting of crops, leaving people who worked the land time to relax. So of course, this was the time utilised for marriage ceremonies. The things you learn!

The summer solstice is celebrated in many very different ways across the globe. Some fun examples include…

As already mentioned, the summer solstice is also referred to as Midsummer is many parts of Europe and places where Christianity is the dominant belief. Midsummer is particularly celebrated in Sweden, where the country stops to observe many festivals, festivities and extended dinners outdoors with friends and family. Many families will dance around maypoles and greenery is placed over houses and barns to bring good fortune and health to people and livestock (a traditional now more so done for fun).

The summer solstice also coincides with International Yoga Day, the world’s daylong celebration of yogis and all things yoga. This year, Yoga Day will see a yoga extravaganza be held in Ranchi, the capital of Indian state Jharkhand, during which over 30,000 yogis including the Indian prime minister will practice yoga together. Namaste! Fun fact - this date is also International Surfing Day.

The day of private reflection

Each year on June 21 the people of Northern Ireland acknowledge and reflect on the region’s past conflict, also known as The Day Of Private Reflection. The day aims to promote a more peaceful future. The date of the summer solstice was chosen because it was deemed an opportunity to look both forward and back.

Further afield in Iran the midsummer festival of Tirgan is held. The festivities include splashing water, dancing, reciting poetry and serving traditional food such as spinach soup. Children also rejoice by tying rainbow-coloured bands on their wrists, which are worn for ten days, and then thrown into a stream.

Of course, for us here in the UK, Stonehenge is one of the most significant sites to visit during the summer solstice. This ancient prehistoric world heritage site has been a place of worship and celebration at the time of solstice for thousands of years.

Ideas on how to create your own summer solstice celebration

Host your own summer solstice celebration for friends and family by:

Enjoy next year’s summer solstice in a brand new home

The best way to celebrate the summer solstice and the beginning of summer is by spending time outside, ideally in your beautiful garden, on your lovely balcony or under the shade of an outdoor setting.

Not currently got a garden? It might be time to start looking for a new home!

GWlegal has more than 30 years’ experience in conveyancing and property law. If you are in the market to buy or sell, we’d love to chat about how we can help you realise your homeownership dreams.