Retirees to run out of cash by age 75 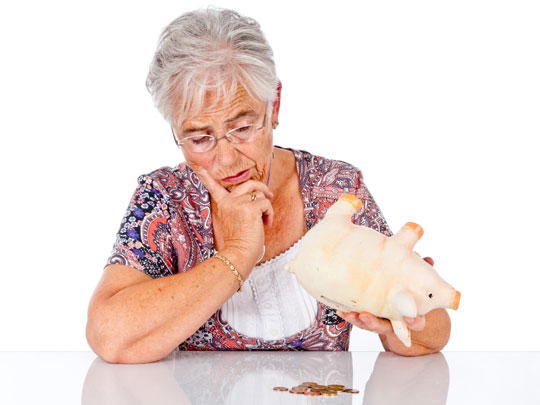 Pensioners withdrawing £3000 a year from the age of 65 would run out of savings by the time they turned 75 years old, according to latest research by Age UK.

The figures are based on a generous £29,000 pension pot, well above average savings, and if returns on the remaining savings were 3 per cent.

Retirees may be able to drag out their money by a year or so if they withdrew £2000 a year instead (this would see them through to aged 81) or, if returns increased to 5 per cent, they would be able to withdraw £3000 a year until they were 76.

While many have some concerns about the pension reforms poised to come into play from April and the impact it could have on the long term financial stability of retirees, there are a number of pensioners who simply have to focus on their short term finances and have little choice but to withdraw sizeable chunks from their pension pots now.

“It’s been well documented that many retirees are entering retirement far less financially stable than they had hoped and expected. In times such as this it’s difficult to look beyond the here and now so they are understandably trying to fix today’s problem and not even think about tomorrows.

“Equity release is a solution for tomorrow’s problem however. Should pension provisions dry up and savings evaporate, homeowners could cash in on the value of their property to ensure they continue to enjoy their retirement.”

Goldsmith Williams Solicitors is a founding member of the Equity Release Solicitors Alliance (ERSA) and a member of the Equity Release Council (ERC). Our team of specialist equity release lawyers and advisers can provide help and advice on the legal nature, implication and effect of your chosen plan. Our unique home visit service means clients can be seen in the comfort of their own home and at a time to suit them… all at no extra cost.