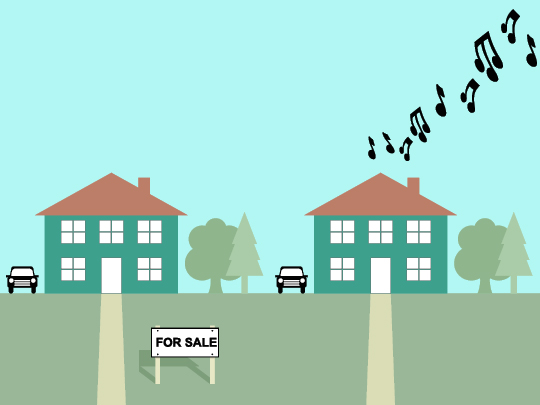 The famous Night & Day gig venue in Manchester could have its licence revoked following noise complaints from residents.

Manchester City Council is currently reviewing the venue’s licence after a resident in the block of flats described his living arrangements as ‘a living nightmare’ and accused the venue of starting club nights and turning up the volume ‘so much that the bass shook the pictures on the wall’.

This is certainly an extreme example and many supporters of Night and Day, including Elbow’s Guy Garvey and The Smiths guitarist Johnny Marr, believe it to be incredible unfair on the venue – after all what do you expect if you move next to an established music venue in a city centre?! However what happens if your residential neighbours start cranking up the volume?

There are many different kinds of nuisance noise. The most common kinds are:

However any loud noise that repeatedly disturbs you can be classed as a nuisance.

It is not an unfair expectation to want our homes to be our sanctuaries; an oasis of calm against the hustle and bustle of the world outside. So if this tranquillity is broken you need to know how to restore the peace and quiet.

First of all talk to your neighbour. They may be completely unaware that they are being as noisy as they are. By bringing it to their attention in a polite and friendly way could prevent it from being a bigger problem and also avoid any ongoing awkwardness. But if this does not work, or you don’t feel as though you can approach your neighbour, there are other options.

Put it in writing

If you would prefer not to discuss the matter face to face then you could send a letter. It is a little bit more formal and authoritative so therefore might have a better response than a friendly chat. It can also provide the basis of any official complaint should you need to pursue the matter further or at a later date.

In your letter you should include information about:

Be aware of the tone of voice of your letter. If you want to try and stay on friendly terms then include phrases like ‘I just wanted to make you aware of the noise’ and ‘I hope we can come to an agreement that works for everyone’. However if you’ve had about enough you may wish to adopt a sterner tone and make it clear that, if the situation is not resolved, then you will be contacting the local authorities and/or the police.

Bringing in the big guns

If the noise remains a problem then you can contact the environmental health department of your local council. Under the Environmental Protection Act 1990, councils are obliged to take reasonable steps to investigate complaints about noise. Should they believe neighbours are creating nuisance noise they must serve an ‘abatement notice’. This either prohibits the neighbour from making that noise altogether or restricts it to certain times of the day. In cases regarding let property, the abatement notice can go to the tenants and the landlord.

Failure to comply with an abatement notice can result in a fine of up to £5000.

When making a formal complaint it is a good idea to have a record of the disturbances including the time, length and nature of the noise. Recorded evidence could also help your complaint.

Neighbour disputes are tricky, particularly as you have to continue to live next door to them for the foreseeable future. That’s why we always recommend trying to resolve any disputes in a friendly, civilised manner wherever possible otherwise you can create a somewhat tense and even potentially dangerous situation.

When it comes to nuisance noise make sure you’re being reasonable before doing anything. If, for example, your neighbours have a one-off party at the weekend which goes on until the early hours then you can’t really grumble. However if every night is party night then you do have cause for complaint.